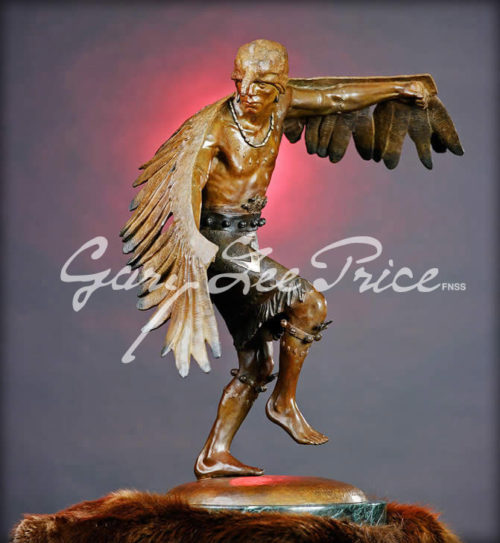 Lifting my wings
I listen
To the thunder of the drum
Calling me to dance
To become the eagle.

My feet are set free
Raising my spirit into the sky.

My arms carry the wind
Across my wings…
I fear nothing,
My flight is towards the heavens!

Whenever I create a Native American piece, something deep inside is stirred and touched. Before long the studio is pounding with flute, drums and chanting. It truly is a ‘zone’ that feels familiar. In creating my eagle dancer I wanted the older, turn of the century headdress which was bound cotton. My research took me to old Bureau of American Ethnology bulletins and Dancing Gods by Erna Fergusson (1931).

“Southwestern Indians have no better friends than artists, who recognize that the Indian is essentially an artist. They value his art in all its forms, they help him without condescension, and they respect his integrity too much to try to make him over into something foreign”
-Erna Fergusson

To actually ‘feel’ the fluidity and message of the dance I contacted my good friend Howard Rainer who used to do the Taos Pueblo Buffalo Dance as a young man. He told me who to contact and I had them do the Eagle Dance in my studio. It was nothing short of poetry and magic in motion! The movements were so light and graceful, yet full of power and majesty. The up and down motions and circular aerial pivots and banked turns really made me feel as though I was in the midst of eagles. I actually did two pieces, one titled “Eagle Medicine” depicting both dancers and the then the larger single figure entitled “Winged Messenger”. The eagle is the mediator between the Creator and man and on his wings we receive wisdom.

It was a very rewarding feeling to be commissioned to create “Winged Messenger” as a monumental piece for Culver Military Academy in Indiana.