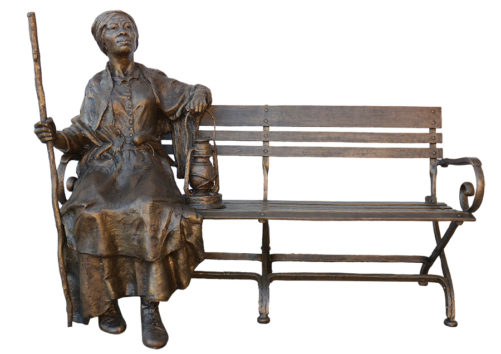 Harriet Tubman was born into slavery, but she came to know her destiny was FREEDOM. Over the course of her life, she contributed to the physical and SPIRITUAL freedom of many people. She was one of the first abolitionists and was a ‘conductor’ of the Underground Railroad – a network of likeminded individuals dedicated to the liberation and freedom of enslaved peoples during the era of American slavery.

I sculpted Harriet Tubman in one of her rare moments of repose, in order for you to converse with her on the topics of bravery and courage. I sculpted her with a pistol, as she was absolutely resolved to not let even her own family cower and rescind back into captivity and domination, as they fled their captors. She was determined that all people deserve respect and honor and most importantly FREEDOM – the freedom to create their own manifest destiny – not that of others!

I truly hope you feel of her indomitable spirit and inherit that for yourself. May we not let her efforts in any way be in vain! THANK YOU, HARRIET.