View cart “Journey II” has been added to your cart. 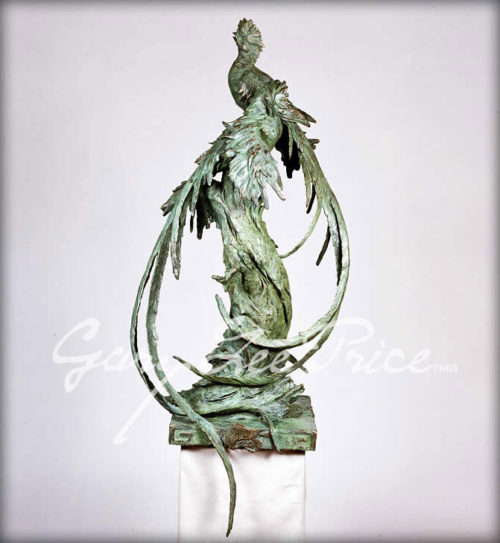 Often times ideas for a piece do not realize fruition until years later. In May of 1980 several of my U of U college buddies and I hired out Guy Lane of Provo and took off driving through Mexico and Guatemala. Dozens of ancient Mayan and Aztec ruins were visited throughout our month-long trek. It was my first rain forest experience, leaving a lasting impression upon me. It’s density and ‘greenness’ were beyond anything I had seen, and after witnessing a jungle thunderstorm, I knew the reason for it’s lushness. I was extremely impressed by the fact that the Guatemalans had named their currency after a bird; instead of dollars they have Quetzals. Not until seeing a giant Mayan headdress in a museum in Mexico City did I fully understand the reason for choosing the Quetzal as Guatemala’s national bird. Its iridescent plumage makes even the purest Mayan jade blush in envy. Quetzals are on the endangered species list and the rapid deforestation process makes its survival critical. The Quetzal must have its freedom and dies quickly in captivity. The Pre-Columbians respected this and would pluck out the two longest tail feathers of the male by night and then release the bird so its numbers would continually increase. Today we need to respect the habitat and freedom of this truly resplendent bird so that our children can someday make the same pilgrimages to these pristine ‘palaces of green’ and witness for themselves ‘Rain Forest Rituals’.