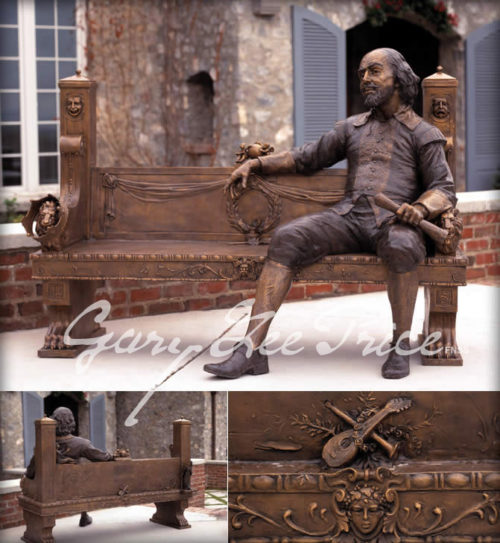 “For nearly 400 years Shakespeare, the world’s most popular playwright, has completely described the human experience. His most common theme is love, with both its ability to build and destroy. However, all desires and follies are dealt with in inexplicable detail. His timeless characters help us understand the psychology behind heroism, madness, love, jealousy, laughter and the love of power.
In his 37 plays we mingle with those from all walks of life including kings, queens, peasants, lovers, killers, pick pockets, drunks, philosophers and even fantasy figures. We cannot help but identify with the strengths and weaknesses of these fellow human beings whether it is in a comedy, a history, or a tragedy.”

“All the world’s a stage, and all the men and women merely players: they have their exits and their entrances, and one man in his time plays many parts…”

“Shakespeare was a very involved and exciting piece to sculpt. Any time I create a piece, especially one of this magnitude, I try to close myself off from the world and totally get into that “zone”. For a few months I was reading every play and watching every program or production I could find on Shakespeare. I particularly enjoyed the biographies and controversies on whether or not one man could really have had all the knowledge necessary to create such a vast array of work.
The most difficult part of creating my life-size Shakespeare was to quit working on it. Trying to represent him and his work was like trying to sculpt all of humanity in just one figure. The bench ended up being my storyboard and it could have gone on ad infinitum!”